Disc Creatures is a tribute to classic monster catching RPGs from the golden days of portable gaming. Choose your three starter creatures and set off as a licensed Disc Ranger (a DiscR!) to tame the greatest of creatures and bring peace to the land!

Disc Creatures is set in a world where humans live alongside a wildly varied cast of creatures, all with different personalities, abilities, and moral codes. Travel across a quaint, quirky landscape, taming creatures and helping those in need! Mysteries fill the land of Disc Creatures, and some are darker and more formidable than one might expect... 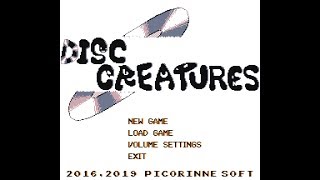