The Witch’s House, originally released in 2012, falls within the tradition of Japanese horror RPGs with heavy emphasis on puzzle-solving and jump scares. Among other entries in the genre such as Ib and Ao Oni, The Witch’s House surprised fans with pixel-art that conceals truly frightening horror.

The Witch’s House is deliberately designed with traps at almost every turn--sudden death is unpredictable and it keeps players on their toes. Anything can happen at any time.

With completely remastered visuals, The Witch’s House MV will feel fresh to even the most familiar old-school fans. Fans will also be greeted by a new difficulty mode that includes new events upon completion of the base game.

・A horror atmosphere wherein players solve puzzles based on clues found in the house.
・Completely reimagined graphics that make for a beautifully terrifying experience.
・Brand new unlockable difficulty mode with new events and dialogue.
・Violence and gore that are not recommended for the squeamish. Player discretion advised.
・Sudden deaths that lurk around every corner and await every misstep.
・Items must be used deliberately as players solve the puzzles for themselves.
・Fixed save points (just keep an eye out for the talking black cat).
・Convenient controls with diagonal movement. Game pads are supporting and recommended.
・Head phones strongly recommended.

The Witch's House MV is an RPG Maker MV remake of the original game, which was released back in 2012.

We remade all the graphics, including map tiles and character sprites, and worked hard to enhance the atmosphere and 2D beauty in The Witch's House. It took us five times as many hours to create this version, but we feel like we've finally managed to satisfy ourselves.

Aside from graphical improvements, we also added two new difficulty settings that was not present in the free version.

・"The normal difficulty isn't enough to satisfy me..."
・"I'm not averse to instantly dying upon reaching new areas."

If either of these describe you, then we recommend you give this new difficulty a try. You also may be able to uncover some new story bits concerning "her"...

The world of The Witch's House has been reborn anew, and we sincerely hope you'll all enjoy it. 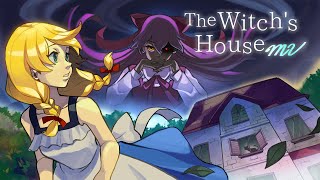